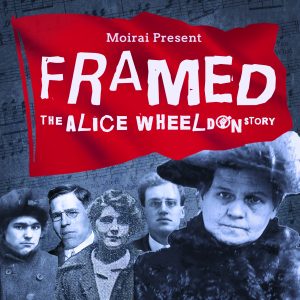 The Wheeldon & Mason families were convicted of conspiracy to murder. They were tried at the Old Bailey in London in a blaze of publicity. They were found guilty & sentenced to prison.

“Framed: The Alice Wheeldon Story” is a new folk music and song show written and performed by local Derby trio Moirai (Jo Freya, Sarah Matthews and Mel Biggs). Join us and discover this 100 year old tale of fake news, family values and activism which is oh so relevant in today’s turbulent modern world.